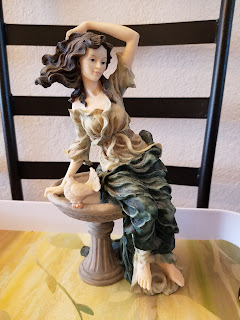 Years ago, I found this ceramic angel at a thrift store. When I moved to my next apartment, one of her wings broke off. I tried to glue it back on, but it wouldn't hold. I broke off the other one and sadly threw both of them away.

In the meantime, I was dealing with upper back pain. One day, when I was looking at my angel, I began to wonder if I had wings that were torn off.

Throughout my life, I have suffered numerous incidents of trauma. Eventually, when I was introduced to Facebook, I discovered a LOT of people have. And many of these people, including Teal Swan, were traveling the world helping other people recover from these experiences. Dolores Cannon became another person I listened to... about being a volunteer.

My question to you is if you realized you were an angel who came to earth to help other people, especially the ones who believed they were unlovable and unworthy, knowing you'd have a difficult assignment, knowing that your heart would be broken numerous times, would this change the outlook and perspective of your experiences?

You see, I found myself wallowing in self-pity about being rejected (abandoned) again - a repetitive pattern throughout my life. A new man had moved into my apartment complex and began what appeared to me as making up excuses to come over and visit me, then stay for several hours. He'd always tell me if I needed help with anything to let him know. I had no experience with men doing this purely for platonic reasons and got attached.

Then at the next social event, I casually mentioned I think I am an angel and that my wings were torn off, so I needed new wings (hoping he would make some for me). I expected him to shrug this off as being silly, but instead, he told me to look up Willy Nelson's song, Angel Flying Too Close To the Ground. I added it to Watch Later on YouTube.

When I watched it the following day, I cried. If this song was the only reason I was to meet him, it is enough.

I then read some comments under the YouTube video. Apparently, it also has meaning to those who have lost loved ones to death.

I thought about the people I know who lost loved ones.

I thought about the parts of me that had died. Can I learn to heal my own wings?

I thought about all the times I was hurt and abandoned, and how much I lost as a result of broken love affairs, including most of my belongings. I didn't understand why the men who weaved their way into my life seduced me and disappeared.

This beautiful man I felt an attraction to told me he wasn't interested in a romantic relationship after I confessed how I felt. Then he decided it was best to avoid me. Note, I did not use the word love, but it didn't matter. We all jump to conclusions, don't we? While I wanted to know what his conclusions were, I didn't ask.

Perhaps if I thought about it from the perspective of being an angel, with many people to help, I can be content with serving a higher purpose in their lives.

With a higher purpose in mind, I returned a few weeks later to tell him I apologize for jumping to conclusions, and I mainly wanted him to know that he made a significant difference in someone's life - mine. The lower road was to be angry, the higher road was to be grateful for what I got out of it - including being catapulted into another growth spurt. If he hadn't pushed me away, I wouldn't have pursued the programs that began to show up.

I went to work revisiting the traumas I had stuffed down and built a brick wall around. A program related to my situation, facilitated by Sheleana Aiyana, Spiritual Counsellor and Founder of Rising Woman, appeared in my Facebook feed. Because it was affordable, I signed up for it. Shay described my entire life just in the introduction.

Then I consulted with Ambika who did a ThetaHealing session on me, after telling me my organ of resonation is my spleen - that I attract men who have been abandoned. No wonder. She cleared out some old programming and replaced it with new 'designer software.' She also recommended the book Dodging Energy Vampires by Christiane Northup, M.D. where I discovered why I got involved with the men of my past - both energy vampires and narcissists. Just like Shay of Rising Woman, Christiane described my entire life as well. Even as a successful surgeon, she dealt with the same issue. It appears this situation is a common one.

Naive empaths such as myself want to believe in the good of everyone and the potential of a person vs who they actually are. With our big hearts and compassion, we overlook the 'red flags' and get sucked into abusive life-sucking relationships - with both males and females - and not just romantic ones. Energy vampires can 'smell' us from a mile away. These relationships can leave us with symptoms of chronic pain and autoimmune illnesses, both of which I endured. Fortunately for me, I didn't stay in any of the romantic ones for more than four years. I didn't stay in employments with one for more than a year.

There are many related programs popping up for me to look at now. In my pursuit of self-development, I want to do ALL of them, but this isn't realistic. Instead, I am dreaming of meeting a trauma-informed psychologist who will open a Transformational Recovery Center (a name I made up) I can co-run with them, and get access to all the different therapies that we invite in as well as support groups and fundraisers, like concerts, to cover the cost for those who can't pay.