Last week at our monthly bingo and birthday party gathering, I found out I qualified for a free CaptionCall phone which would connect via Bluetooth to my cellphone and set up an appointment. Because the installer ended up with ten appointments on the appointed day, he called to see if I was available yesterday (Saturday). I was.

The man who arrived was about my son's age, built like a marine with a strong muscular physique. Just after he entered my apartment, I asked him this question.

"What inspired you to get into this line of work?"

I was all ears as I listened to his fascinating story.

The young man was from Puerto Rico and had been in FEMA (Federal Emergency Management Agency) for five years but needed a break... a break from removing lifeless, charred bodies from disaster sites. Through contacts he had, he secured a job with the federal government installing CaptionCall phones and teaching people how to use them. He had to study for a number of certifications.

The process took longer than expected. A 30-minute installation grew into 90 minutes, as he ran into a unique situation. I didn't have enough speed on my cellphone service to transmit the captions. He decided to add a hotspot device he had with him which needed to be plugged in near the phone. Then he had to call customer service because the captioning didn't work, and instead of only being on hold for two minutes, he was on hold for over six minutes before he gave up. I found out we had something in common... we expect people to do what they say they are going to do. He muttered about employees goofing off at work instead of doing their jobs. It must come from being in FEMA where every second counts.

I offered him a glass of cold water which he gulped down within seconds. While he was on hold, I asked another question.

"Do you live nearby?" He said Killeen. He also told me of many other places he lived while he was with FEMA. I asked him what he does when he isn't working. He breeds dogs.

Well, I am known for networking. Anca's Animal Ark Sanctuary floated into my mind. I had met her when I was in Toastmasters, I told him all about the sanctuary, rescuing pit bulls from euthanization at shelters, networking with rescues all over the country, her background with everything else she has accomplished, and wrote all the information down. I hope they get to meet. I know they would be a tremendous asset to each others' life goals.

For more information about CaptionCall, go to https://captioncall.com/ 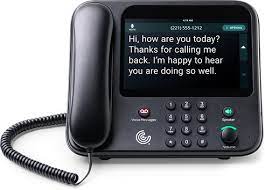 8/20/22 Update: Since I don't have the option to answer with my cell phone when it is connected to the CaptionCall phone via BlueTooth, and I can hear fine with my cell phone, I decided to return this. Packing it back into the box it came from didn't work, but I called them. They shipped me a larger box. It was a nice idea!
Posted by Renee Alter at 9:17 AM