One may never know the source of their health issues until they begin to explore the spiritual aspects of their past lives to get a glimpse of what they brought into their current one.
The ceramic woman below originally had wings. I can't remember where I found it. In one of many moves, one of the wings broke off. I sadly broke the other one off as well. But I couldn’t help but wonder… could the nagging pain in my upper back as well as the uncomfortable pin pricking sensation be because I used to have wings that had broken off? 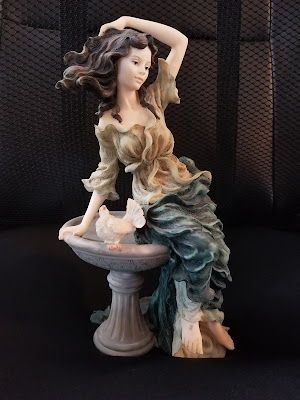 Ordinarily, one could shrug all this off as hogwash… except the details coincide with what other energy healers have told me along with personal discoveries.

Bryan is a psychic medium and healer. In an online event, even over Zoom, he made eye contact with me and said, “Use your clairaudience. It’s your strongest.” I had to look up what clairaudience means. When you have a skill like this one or any other one, it feels normal to you. I didn’t know I had this ‘gift.’ It’s the reason I heard that voice telepathically that told me to go to the laundromat back in 2010.

This led to a few sessions with Bryan that included a general reading, a reading to discover who my spirit guides were (along with their names), and what some of my past lives were. I was curious, not expecting anything significant. Then I was amazed by what he told me when he matter of factly answered my list of questions with what I knew to be true. One of the questions I asked was if he could see if I had wings that had broken off. Yes, he did. (I wondered about the Nephilim of the bible... was I one of their offspring?) He also said the wound could be healed… energetically.
Bryan would be telling me one thing and suddenly mention something else - like, “your heart was broken by a person of authority” and “your stuck belief is you are broken” which led me to wonder, once again, about broken wings. Perhaps without my wings, I felt powerless.
In a past life session to explore the root of chronic throat irritation, Bryan said I had taken a vow of silence in a past life. I contemplated the silence I climbed inside of for so much of this life.
I then went to see Ambika and ask her about chronic throat irritation - a physical reason for it. Instead, she asked, “Would you like to explore the emotions behind this issue?”

Ambika has a whole list of talents and skills she acquired over the years, including ThetaHealing®. In this particular session, she said I had to swallow a lot of stuff (stress and abuse) in my life… and in past lives as well. Then she asked me if I can remember ever being strangled. No, I couldn’t… but the following day, I remembered feeling a sense of terror as I witnessed my father strangling my little brother in one of his temper flares. My mother did get him to let go, and when he realized how close he came to killing his child, he never did anything like that again. But I had to ‘swallow’ the experience just like I ‘swallowed’ so many other experiences. There was no one to talk to about it. I'm sure I concluded that if he did it to my brother, he could do it to me. Therefore, I am not safe. It's interesting that I developed intestinal pain from what was diagnosed as anxiety after that.

As a child, I wasn’t allowed to speak up about anything and did, indeed, swallow it all… stuffing it down deep into my body. I've learned this is what bodies do to protect you. I continued to swallow many other situations such as abusive partners, bosses, medical procedures, and more.

I then had an additional session with Ambika to dig deeper. I was surprised when she picked up past lives that included some of what Bryan had told me. In the digging process, I identified the belief that I am a throw-a-way… in addition to the one that I am broken. This was followed by a ThetaHealing® session to pull these beliefs and replace them with new ones.
Historically, people were absolutely brutal… especially to women... and unfortunately, some of this still exists today. Many of us believed we had no choice but to take the abuse... that we deserved the abuse. I thought about the wings of the ceramic woman I threw away. Maybe I should have kept them in a safe place.
I don’t discount three scenarios or messages in a row with similar information. Add a fourth scenario that happened just after readings from both Bryan and Ambika: the cat that showed up that had been attacked by something that left puncture wounds on his throat… resulting in an abscess that suffocated him. I didn’t see this as a random event. I have often felt like I was suffocating.

But this isn’t the end of the story. Once core beliefs and roots to illness and chronic pain are identified and brought to the surface, the next step is to learn the skills to manage them, transform them, and become empowered. One must learn to be their own superhero. I am working on it.
Posted by Renee Alter at 8:47 PM