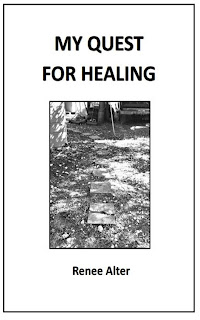 Just after I completed writing My Quest for Healing, I invited the next portal of my development to open. What appeared was the topic of forgiveness. A chain of synchronicity occurred.

My youngest sister contacted us about getting all the reels of childhood home movies digitized by iMemories. Divine timing. I felt certain that watching myself as a child would be healing.

The videos were finally ready for viewing. I watched us laughing and having fun. I couldn't identify with the little me. Either I am a completely different person now or I compartmentalized all those memories, choosing to hold onto the traumatic ones.

Wisdom and knowledge tell me this is a normal response to survival. We, as humans, are hard-wired to survive, therefore we will hold onto the parts we need in order to survive. We had to remain alert to the possibility of danger - in case it struck again.

But I am watching cute, happy children. We clowned around while washing the VW bus that transported the eight of us, throwing fall leaves from a huge pile at each other, playing at the beach during the summer, shoveling snow, and throwing snow. Perhaps after watching them again, I'll be able to override the survival memories with these.

Then I got a phone call from Ivery, the Jewish Nigerian woman I produced a book for back in 2019. We hadn't talked to each other in about two years. After the introductory conversation, she asked me what books I am reading. I told her I am reading Becoming an Empowered Empath, which suggests my lower chakras may be closed. She said it is about forgiveness, did a forgiveness prayer with me, and recommended additional books to read. I found two of them used for about a dollar on Amazon and ordered them. Lead Me, Holy Spirit by Storme Omartian and Soul, Mind, Body Medicine by Dr. Zhi Gang Sha. She also suggested that I write healing words on the outside of the bottle of water I drink from, infusing the water with the power of healing just like Dr. Emoto recommended. In a small world, she had personally visited his lab during her travels.

Dr. James Mercer is running for Justice of the Peace in my town and has been in social media posts, along with his best-selling book, Secrets & Shame. I found it at my local library and read it within 48 hours. The only reason I was able to read about his horrific childhood is because he is smiling in every photo I've seen of him on social media. He owns three funeral homes, Lonestar Social Services, and is running for office. As I read his book, I felt gripped at the edge of my seat, wanting to know how he got from where he was to where he is now. Forgiveness. I contacted him and plan to meet him in person soon. I want to talk to him about his process of forgiveness that enabled him to let go of his past to get to where he is now. I think about how he was able to push through the abuse he endured to focus on protecting and taking care of his mother and younger siblings. A true warrior. He is Jewish and had a female rabbi as a mentor.

With that in mind and what Ivery had been telling me, I felt drawn to pull Rabbi David Cooper's book God is a Verb off my shelf and open it to a random page. Then I went to the index to look for the word forgiveness. There were several sections on the topic plus a number of guided meditations, including one for archangels. I read, once again, that the Reiki prayer was the traditional Jewish bedtime prayer. I had written it down on an index card for Reiki but moved it to the basket by my pillow to read at night before bed.

In addition to forgiveness, I thought about finding a new friend. Yesterday, I called a woman I had never met about the cats she got TNRd (trapped-neutered-released) to ask about which records she still needed. We ended up in a 100-minute conversation. I think I just found this new friend! Both of our middle names are Sue. She mentioned she grew up on the East coast which turned out to be the next state over from where I grew up. Then she mentioned moving to California, which turned out to be the next city over from where I lived. We have similar health challenges. We're close in age. They live on her husband's disability. I knew about resources she didn't know about. She moved here per her son's recommendation. So did I. We discovered we had similar beliefs on many topics and had similar experiences feeling like we don't belong here as, for the most part, people here are mostly white, the same religion, and set in their ways. As I listened to her talk, I was able to share everything I have since discovered and the people I've met who do align with our beliefs. I left her encouraged, and I'm sure we'll be visiting again soon. I plan to connect her to some of the people and resources I told her about. I love being a connector. And I hope I provided some energy of forgiveness to some of her bitter ones.

This morning, in Reiki meditation (was doing Reiki on myself), I visualized us 50+ trillion cells letting go of trauma memories and being infused with courage and unconditional love. After all, 'we' have a brand new body. It's just memories that hold us back. By the end of my Reiki session, in a racing mind episode, a lifetime of memories flooded into my consciousness, including experiences, books I read, books I wrote, conversations I had with people and my spiritual committee, and the numerous things I have listened to - just like the sewer that backed up into my bathtub one day.

Them: "Hello! We're still here! We just want a little attention, that's all. Just a little attention. Then you can rinse us all away, sterilize with bleach, and have a clean tub again. You're the one who thinks we are made of glue, but we are the consistency of fluid - just passing through to say hello."

Me: "Must you all come at the same time?"

Them: "We are not made of glue, but we like to stick together."

I remembered the woman I met who called herself Seven telling me Jesus died on the cross for us, it isn't my job. Now there is a woman who calls herself Ivery telling me I still have to work on forgiveness. Both are courageous, powerful females. I think Seven is Nigerian, too. Both have Shamanic insight.

Ivery got me thinking about all the books I had read that included the topic of forgiveness. Mitch Albom's book Have a Little Faith. Dalai Lama and Archbishop Tutu's book The Book of Joy. James' book. I even wrote about it in my books, including what Louise Hay said about viruses.

The life cycle for me is forgetting what I already processed, wrote about, and finding it again as if I am seeing it for the first time. Thanks to technology, all I have to do is type a word or phrase in the search bar. I typed the word forgive in my blog's search bar.

June 3, 2011. Working on My Emotions. The words that stood out were the battleground of my mind pertaining to racing thoughts.

May 18, 2015. Coincidences and Serendipities. I included Dr. Len's Hooponopono.

February 4, 2018. Old Movies. I just watched all the old movies of my childhood for real vs. what I had been watching through traumatized memories.

June 27, 2020. I posted the introduction to my book Personal Journal & Recipes for Healthy Living. I'll have to revisit this book again.

It is below freezing this morning. The first freeze of the year. Although I can visualize freezing the uncomfortable memories, I know they will thaw out again. I had even written a poem titled "Freeze-Dried Memories."

I’ve been awake since 4:30 this morning, processing all of this during the last three hours. Time to climb into my clean tub and get on with my day.

A treasure of a book found me in the used book section of a library titled Forgive for Good: A Proven Prescription for Health and Happiness by Dr. Fred Luskin. I love the concept of renting space in your mind to negative thoughts about others who have hurt us in some way. He adds how we blame others for what happened to us and create a grievance story about it. Next comes the steps for how to shift from being a victim to being a hero - recovering from what happened to us and transcending to being an example to help others. I am also reading The Dragon Doesn't Live Here Anymore by Alan Cohen at the same time. In a moment of synchronicity, I opened Dragon to the next chapter after reading more of Forgive. They both covered the topic of forgiveness.