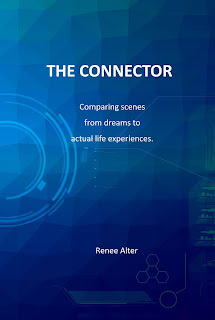 This is a story I began writing many years ago but had not decided what to do with it. I've written other short stories, but this one wanted to be its own book. I did update the ending to bring it up-to-date. It is about 4,300 words, 34 pages. Available as a paperback (because I wanted one for my bookshelf) and Kindle.

The dreams I recorded in a journal over the years included scenes about World War II, a library I'd never personally visited, a collapsing stairway, and a theme park.

Years later, I was able to see similarities between the dreams and interesting life encounters with the Rabbi I met, the psychic I met, and the interconnectedness of life experiences and people.

The final chapter is my fantasy of being healed by extraterrestrials with advanced technology.
Posted by Renee Alter at 6:42 PM