The Relationship Between Trauma and Resilience

I am curious. Did you play in competitive sports when you were in school? Did you ever get hurt? I bet when you did, you got right back up into the playing field again.

Some kids play in competitive sports from the time they are really little. They get pushed, shoved, hit, thrown, get bruised, break bones – and get right back up and play again. I wasn't one of them.

Maybe you were like me – one of the kids who was bullied in school, had an older sibling who intimidated you, and a father who assaulted you with degrading words, so you grew up feeling worthless. I was traumatized each time I got hurt physically or emotionally.

One time, I was riding my older sister's big bike when no one was looking. I didn't know the brakes didn't work and couldn't slow down when I came down the hill and turned the corner, making friends with the stone wall. I sprained both my wrists in addition to the other scrapes and bruises the bike and the wall decorated my body with. I'm sure I suffered emotional wounds as well.

When I was 21, I dozed at the wheel and opened my eyes just in time to see the parked car I was about to crash into. My Fiat folded like an accordion and I sustained a whiplash, concussion, and a lot of bruises – especially where the seat belt was – across my chest and hips. A 19-year-old boy I was infatuated with had just broken up with me, so this emotional trauma was layered on top of the physical injuries.

When I was 36, I lost control of my Toyota and jackknifed sideward into a bus bench that was cemented into the ground after a lady driving a Mercedes clipped the back, right corner. I couldn’t walk for months. At the time I had this accident, I was an emotional mess in the midst of a volatile relationship with a narcissist. Once again, trauma was layered on top of physical injuries.

It seemed like the injuries I collected never healed, which contributed to the chronic pain condition the doctors diagnosed as Fibromyalgia. They were very generous with all the drugs they prescribed to me, and by the time I was 43, I couldn’t work anymore and found myself on permanent disability.

When I joined Killeen Toastmasters in July of 2015 at the ripe old age of 59, I began to get a different kind of education. I heard stories from fellow members about all the adversities they’d faced and how they were dealing with them…especially from Tim. And I couldn’t use the excuse that I am a female because I met women like Anca, who was a professional boxer, and Rolana and Delsina who were in the army. I began to wonder… what do they have that I don’t?

Some people become firefighters, police officers, first responders, go skydiving, skiing, go bull riding, go into the military, and volunteer for rescue missions. They face danger, get hurt, recover, and go face the danger again. I wanted to know HOW.

I began to do some research, found some books, and I believe I finally figured it out. It’s the relationship between Trauma and Resilience.

In Dr. Peter Levine’s book, Waking the Tiger: Healing Trauma, I learned that trauma, especially in early childhood, programs your brain and nervous system to stay in survival mode – always on alert – because you never feel safe. Because of this, you don't get the rest and repair cycles you need to heal.

I found an ACE questionnaire online. I scored 8 out of 10. Here's the link to the quiz so you can take it yourself:

I found out I am not alone when it comes to ACE. People who have suffered from ACE become afraid of everything. Fear attracts more situations to be afraid of – like the abusive relationships I blindly walked into. It makes you jumpy because your adrenals are constantly being ignited – and rarely for any good reason.

On the US Dept of Health & Human Services website, Substance and Mental Health Services Administration, I found: “Adverse childhood experiences (ACE) are stressful or traumatic events, including abuse and neglect. They may also include household dysfunction such as witnessing domestic violence or growing up with family members who have substance use disorders. ACE are strongly related to the development and prevalence of a wide range of health problems throughout a person’s lifespan, including those associated with substance misuse.”

On MindTools.com in an article on Developing Resilience, I found: “Resilience (or resiliency) is our ability to adapt and bounce back when things don't go as planned. Resilient people don't wallow or dwell on failures; they acknowledge the situation, learn from their mistakes, and then move forward.”

I've been making some progress – investigating ACE and watching for ANTs around fear (automatic negative thoughts). The main ones are convincing my brain that the pain in my body is not dangerous – which in my case it isn't – and developing a sense of safety and self-regulation. I am easily triggered into a PTSD reaction with my heart pounding, back spasms, and exhaustion. I hope to find a way to regulate my nervous system in the near future to stop the vicious cycle of fight or flight so my body can rest and repair itself.

In conclusion, if you're like me, dealing with PTSD, fear, auto-immune disease and/or chronic pain, look into ACE and Resilience. You may be surprised what you learn about yourself, the people you grew up with, and the people you know now.
Posted by Renee Alter at 11:41 AM No comments: Links to this post 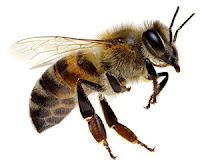 For the past number of months, there is often a solo bee that flies really close to me yet not quite landing on me. I was feeling a bit unnerved. After all, I had been stung by a bee when I was a little girl.

'It' was at the Walmart parking lot -- several different days, even to the point of trying to join me in my car. However, I didn't want it to be inside the car with me, and I had a hard time getting it to go away.

When I got home, 'It' was there again waiting for me. What on earth?

'It' was also in the parking lot of other stores I recently visited as well as a restaurant.

What about me was attracting bees?

'It' was really close several different days when I was riding my mobility scooter outside, down to the community room of my apartment complex... and wouldn't go away.

'It' is either flying around my front door or my back door.

'It' is always alone.

I began to think it was the same one appearing everywhere as it is the same size.

I began to wonder... this seems to be more than coincidence...

I Googled the metaphysical meaning of a bee. Look what I found! This is so trippy! 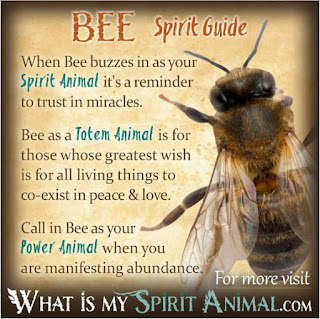 Now if I can accept 'It' wanting to be practically on my body and stop being afraid that it will sting me... maybe it is the same one and just wants to be my pet. If it is the same one, it teleports from one location to another.

I know a few bee-keepers in town.

Key points I want to remember:
Posted by Renee Alter at 10:33 AM No comments: Links to this post

Welcome to my Atmosphere!