My Quest for Healing

Due to the amazing energy and improved strength I've gotten from a new product I began taking back in June - BodyHealth PerfectAmino, I've been busy writing and reorganizing a new book titled My Quest for Healing. I'm truly amazed as to how it all came together - and I'm convinced I had help from the spiritual realm. Here's a sneak peek at the cover and the introduction. 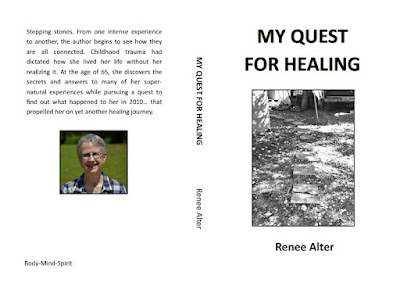 When I landed here in Texas November 2006, I had no idea it was the land of transformation where I would be assigned a new quest, put alone on a boat to be the captain of my own ship, and facing storms in a rough sea. I would also be docking on strange and unfamiliar land with rough terrain.

Ever since I had the supernatural experience in 2010, I’ve been on a quest to find out what happened and how to get back the amazing energy I had. The energy included the courage to pursue the path of doing big things that would contribute to improving world circumstances. I also wanted to know why I burned out and crashed.

While I was in the midst of the (manic) adrenaline high, I was able to walk again after being wheelchair dependent for five years – and unless I was experiencing an anxiety attack, I continued to do so until July 2018.

Seasons came and went. Chilly winters, luscious springs, sizzling summers, and the overnight arrival of fall. I read, I wrote, I watched, I listened, I paid attention.

I became aware of how my mind and emotions affect the trillions of cells that make up my body. I wasn’t the only one feeling abandoned. All trillions of my cells did, too.

Realizing I am responsible for and the guardian of this huge universe of a body inspired me to do the mental health work, drink water, exercise, get adequate sleep, and avoid foods and other destructive habits that could hinder the function of these awesome 50+ trillion cells.

I knew I had to shift out of low self-worth and victim consciousness because my thoughts and beliefs were affecting the universe I call my body. And I was in awe of the connections I noticed in how the spiritual realm was orchestrating my growth. As Abraham-Hicks would say,

Everything is working out for me.

Look for the evidence.

In keeping logs and journals, I had a track record of evidence. I concluded there MUST be a grand outcome for it all.

In 2021, the psychic medium I consulted with told me, “You are meant to be patient on your path. If you rush through your path, you’ll be greatly disappointed in the outcome.”

This is when I realized the path was this quest.