The Adventures of Gnat 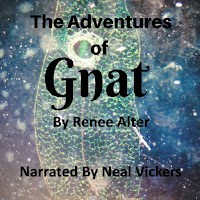 Introduction: This story was inspired after a tiny nuisance of a gnat persistently tried to fly up my nose. I couldn’t help wonder, if one did, what would he see? Enjoy this little tale I weaved!

(Previously published as an audiobook and for Kindle.)

Gnat circled around the face of the new universe he found, looking for a way inside. It was a huge universe... oblong in shape, with four branches as well as mountains, valleys, and unusually odd colored tall grass. Alas, he found two black holes and decided to fly into one of them.

Blackness ensued... no light to be found. Zillions of cells were busy with diverse tasks. Gnat tried to find one that wasn't so busy, so he could ask what the center of this new universe was.

Suddenly, Gnat was swept away into its depths, where both colors and absence of color presented itself. There were both things and no-things. Existence and non-existence. Beginnings and endings. At first, Gnat tried to fight where he was being taken and held on to the closest cell he could find. But a sense of surrender overcame him, and he finally stopped fighting.

Gnat observed a beautiful interconnected universe with planets and stars. But what he found the most amazing was that each of the planets was interconnected with all the others by a stream of energy. As he floated along, he tried to feel the essence of this vast universe. Love.
With love, all the cells peacefully flowed. Cells aged and died off while new cells were born. As long as love was present, the new cells were healthy. But if something else like fear and anger came into play, all the cells were affected negatively.

Gnat wondered… where is the center? Where is the source? How was this universe created? Just then, one of the cells grew larger and began to speak to him with telepathic words. “It all began with two cells which merged and began to multiply within a sensation of love.”

Gnat felt the pulse of the universe get stronger and faster... was a storm coming? Pounding sounds got louder and the pulse he felt earlier got faster. He looked around at the group of cells that suddenly began working harder to bring a rush of new oxygen to all the other cells. He tried to stop one and ask what was happening, but it said, “Not now! Can’t you see we are in a hurry?”

It seemed like forever before the activities quieted back down. Gnat had to sit out the commotion and wait out of everyone’s way before he could continue on his journey.
He came upon an area that seemed brighter in contrast to darkness and a group of wise cells was guiding worker cells in their tasks. Some of the cells were carrying other dead cells to a place where they would be purged to somewhere else. He went up to the one he believed to be the leader and asked, “What are all these cells doing?”

The leader invited Gnat to sit down beside him and began to explain: “Cells are like the employees of a company. The company is the organ that the group of people forms. Multiple companies interact to provide the overall services that human beings need, such as electric—water—gas companies. The management of these companies will sometimes have partnering meetings to share information and find out where the strengths and weaknesses are with the goal of making improvements in the operation of the whole. Each person in each of these companies performs a specific job. Sometimes lots of companies will gather together to have business expos.”

The leader paused, and continued, “We are all inside a human body. Each cell in this body performs a specific job. When an employee becomes overwhelmed by stress, he/she may take action that will affect all those around him/her... spanning out into all other aspects of the company which will affect its function. When cells become distressed, it affects the organ that it is a part of, ultimately affecting all aspects of the human body it is a part of. The same thing happens when positive emotions such as love, compassion, and happiness are predominant.”

Gnat sighed, trying to digest all that he was told. Then he asked, “Could you give me another example? Explain it in another way?”

“Cells are also like the leaves of a tree. Each leaf is an organ made up of the cells that make it a leaf. Groups of leaves are on a branch. All the branches feed off of the trunk, the main source for the leaves’ nutrition. The trunk becomes a network of roots that go down into the earth... interconnecting with the cells of the soil which interconnects with the cells of the water. Leaves also photosynthesize the sun’s rays, along with moisture in the air and carbon dioxide, and provide oxygen for all other life forms to breathe. These life forms all have efficient filtering systems that carry out carbon dioxide and toxins. Sometimes trees will get sick with a fungus, and if it is not treated, the fungus can kill the tree. Life forms can contract a fungus or other disease which can sometimes be fatal.”

Gnat replied, “This makes a lot more sense to me. Since I am a tiny bug, I usually hang out in trees.” Then Gnat asked, “Do you know anything about ants?”

After thinking the ant explanation over for a few minutes, Gnat asked, “Do cells have friends?”

“There are groups of cells that hang out together, so I guess you could compare them to a human having friends.”

Gnat contemplated all he was told, and then a huge burning question rose inside of him. “How long do cells live?”

“Boy, you sure ask some deep questions! Let me see… I’ll start with the ones who live the briefest lives and end with the ones that live the longest. Sound good to you?”

“These are the ones I know of at the top of my head. Certain cells of the digestive tract live for only a few days. Sperm cells have a life span of only about three days. Colon cells die off after about four days. Skin cells live about two or three weeks. Some immune system cells can live for up to six weeks. Red blood cells live for about four months. Pancreatic cells can live for as long as a year. White blood cells live on average more than a year. Brain cells typically last an entire lifetime.”

It got quiet for about five minutes as Gnat and the leader cell breathed slowly and deeply. Then Gnat asked another question. “Do cells ever commit suicide?”

“Yes, sometimes they do. When a cell becomes damaged or undergoes some type of infection, it will self-destruct. A cell’s inability to self-destruct can result in the development of cancer.”

“Thank you for taking the time to explain all of this to me. Would you be able to guide me back to where I came?”

“I’m afraid not. I’ll have to take you somewhere else and have a guard escort you out. But first, I have some very important tasks to complete before I can do that.”

“It was nice getting to know you, said the leader.”

Four hours later, the leader cell finished his tasks and returned to Gnat to take him to the guards. One of the guards escorted Gnat back through the tunnels from which he came. Brightness became darkness, which then became blinding while his eyes tried to adapt to daylight again. Just as Gnat got to the back of the edge of the sinus, a severe earthquake rocked his world. Little did he know that he had caused the slightest tickle which produced a reaction of a terrific sneeze.

Suddenly, Gnat found himself catapulting faster than he’d ever traveled before. Out of the nostril, he flew and smacked so hard into a tree trunk, that the breath was knocked out of him. After a while, he regained rhythmic breathing and was able to return to his Gnat family, eager to tell them about all his adventures.
The End.
Posted by Renee Alter at 12:43 PM