I’ve gone through so many metamorphoses I’ve lost count. With each ‘phase,’ I have lost interest in what I had previously been interested in and developed an entirely new set of interests. As you can see in this post, I am comparing my experience to insects.

Some insects shed their skin multiple times as they mature. I’m sure it must be a painful process. It was painful each time I had to shed mine. My skins included homes, most everything IN my homes, friends, and jobs; hobbies, what kinds of books I liked to read, and what kind of poetry and songs I have written; health challenges I developed and overcame; beliefs, emotions, and mental states; feeling social and outgoing and wanting to hibernate; foods I liked, no longer like, and now all the new foods I like.

“When an insect is about to molt, it looks for a hidden place. Molting can take hours, during which the insect is not able to protect itself. The old skin splits open down the back. Then the insect works to pull every part of its body, including its antennae and legs, out of the old skin covering. It’s a difficult process and the insect isn’t always successful. Some die during molting.”

I have hidden, isolated, withdrawn, and have even disassociated during molts. The trouble is, I had no idea I was molting. No one taught me that humans molt, too. Each molt was extremely difficult, and I often wondered if I would survive them. I’ve even had a few close calls with death. There were times I felt like I walked completely out of who I was and became someone else.

Then there are butterflies and moths. 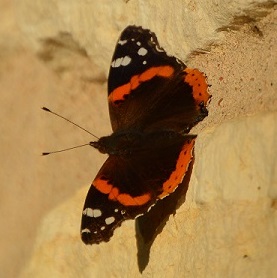 “Butterflies and moths go through a life cycle known as complete metamorphosis. The stages of their life cycle include egg, larva, pupa, and adult.”

I sincerely hope I don't have to molt again.
Posted by Renee Alter at 8:31 AM