The journey of self-discovery continues after I read the book: The Body Keeps the Score by Bessel Van Der Kolk, M.D. This book was recommended to me by Frankie Perez of Frankie Perez's Mindgym after I commented on one of his Facebook posts regarding trauma recovery. Bessel includes information about many different therapies... including IFS... Internal Family Systems... the PARTS of us that as a whole makes us human.

What if I have the potential to discover much more than what I already know? Can I stop comparing myself to others? If I could go back in time, would I have continued my formal education? Would getting a masters and doctorate degrees have made a difference? Would I still feel intimidated by people who have "Dr." in front of their name?

I often felt 'split' depending on who I was with and what was going on in my life. I've felt the bliss of being in love with either a person, a cat, an idea, a song, a book, a piece of art, and more. I've also felt the depth of despair and hopelessness... when I completely disassociated. Among other things, I've come to know I am an introvert with some extravert characteristics. I've come to know my 5-year-old still lives inside of me... both the happy girl and the frightened one.

When I read about humans being made up of PARTS, I sighed with relief. While I like the idea of being a mystery, I feel much more comfortable when I understand what is going on.

Yes, I know about arms, legs, eyes, ears, and all the internal organs as parts. I learned about the different parts of the brain. I fell in love with the term "Amygdala Hijack." The amygdala stores the emotions, and when you feel out of control, it is the amygdala that hijacks you, so you can't think clearly.

I've been learning about how various parts of the brain store different parts of memories. In the case of severe trauma, the reason we can't remember exactly what happened is the memory splits up into different parts of the brain. With the right types of therapies (vs. drugs), the fragmented parts become integrated, and a coherent story begins to form. Then with further steps, the brain can be trained that what happened took place in the past vs. memory hijacking you back into the past resulting in symptoms such as a racing heart, panic, anxiety, and more.

With each growing stage of my life: infant, toddler, grade-schooler, middle-schooler, teenager, high schooler, adult, and every role I've played, I often felt like I was different people. Hormones got their way with me as well as depressive episodes.

Parts? Yes, parts. "The mind is a mosaic. We all have parts." Now my intense curiosity leads me to investigate these parts and become familiar with them. "The mind is made up of relatively discrete subpersonalities, each with its own viewpoint and qualities." "Parts are not just feelings but distinct ways of being, with their own beliefs, agendas, and roles in the overall ecology of our lives." "Each split-off part holds different memories, beliefs, and physical sensations."

Parts include the manager, the firefighter, and the exiles.

Who is the manager? What characteristics does she have? The manager's job is to "prevent humiliation and abandonment and to keep her organized and safe." The manager part was (and still is) competent, held responsible positions, and produces quality work... all while doing an outstanding job at sending all the other parts into exile. The manager told me to grin and bear it because no one wanted to hear about my pain. If I did talk about it and felt the discomfort of the listener, there was embarrassment and shame as well as feeling invisible. The parts I sent into exile were, indeed, invisible... until an amygdala hijack brought them out from hiding.

But it wasn't just me. "It emerged that, as children, nearly all of them were supposed to be seen and not heard--safety meant keeping their needs under wraps."

Who are the exiles? "Exiles are the toxic waste dump of the system. Because they hold the memories, sensations, beliefs, and emotions associated with trauma, it is hazardous to release them." "When exiles overwhelm managers, they take us over--we are nothing but that rejected, weak, unloved, and abandoned child."

I love reading the description that shines a light on all of the unidentified suppressed confusion in my mind and emotions.

Are there any other exiles beside the happy child and the frightened one? How can I retrieve the happy child? Why did I exile her? How can I retrieve more happy memories and FEEL the happiness of those experiences? I'm sure in reality there were many happy moments, yet in one of many cognitive distortions, I discounted the positive and dwelled on the few negative experiences.

Why did I make that decision? Why does ONE demeaning statement take control of your entire life? Why does witnessing ONE act of violence do the same thing? Who is the critic I also sent into exile who is quick to judge both herself and others... and then get overwhelmed by guilt when she realizes she was thinking a critical thought?

Who is the firefighter? What does she do when a threat appears? How does she react? Is she really putting out the fire or building a tomb?

Who is my true Self: the Self that is confident, curious, and calm? The one writing this post? How do I make friends with the 5-year-old, the 9-year old, the 13-year-old, and the 17-year-old who demand attention when I want to read yet another book about recovering from past traumatic experiences that are programmed into my nervous system and feels like dead weight keeping me from going where I want to go?

Where, exactly, DO I want to go? Once I figure myself out, then what? 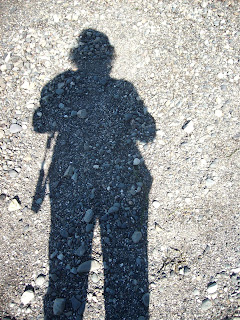