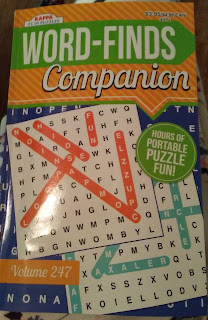 Sometimes words not listed as options appear. (Sometimes you will find your answers when you least expect to in unexpected ways.)

If you can’t find a word from the first letter to the last, try looking from last to first or from one of the middle options. (Sometimes the solution to a problem is found when you look at it at another angle.)

Everything changes including moods. (I must become OK with the crazy fluctuations in my moods vs. expecting consistency. Nothing in this world is constant. Change is a fact of life... regardless of how difficult it is for me to accept.)

All the answers can eventually be found… sometimes you have to look away for a while and then look back again. Everything I need to solve this problem is on this page. (Self-explanatory.)

Sometimes what you think is a word turns out to be something else--a different word entirely. (Question your assumptions.)

When you stop trying so hard to find a word and put the book down or look away, the answer appears when you look at it again. (If something seems hard, put it down for a while, and give your brain a rest. Then look into it again.)

When you’re tired, it’s much more difficult to find what you’re looking for. (It's impossible for me to do anything when I'm tired... including Word-Finds.)

Do you do Word-Find puzzles? Can you think of something else besides what I've listed here?
Posted by Renee Alter at 9:29 AM No comments:

Preface of Love, Life, & God: Getting Past the Pain

On February 15, 2012, (I was 56), I met a man I will refer to as Wayne, as he wishes to remain anonymous. We were both looking for an available check-out line at the grocery store. When he commented that the situation was as bad as being stuck in traffic on the Mopac and the 35, I knew he was talking about Austin, where I had lived back in 1997. I swung around with a sense of excitement, and asked: “you were in Austin?” He replied that he had been working there. I had to know where. He said a recording studio. BINGO. I retained him in lengthy conversation which continued in the lobby and out in the parking lot. He had someplace else he needed to go, so we exchanged phone numbers. Later I texted something in the line of “did I tell you I write songs?” He ended up coming to where I lived to see the guitar I had and listened to a couple of my songs. It turned out that he had played in several bands and had lots of experience in the music industry as a songwriter, musician, and a sound engineer. It was a life-changing event for me.

You see, at the time I met him, I was just starting to recover from falling into what one of my Facebook friends referred to as “THE BLACK HOLE”—a state of severe depression which included feeling completely hopeless and abandoned. My self-esteem had shattered. Memories of past traumatic events had re-surfaced and I had been feeling an odd sense of detachment and amnesia. All of this started about six months after doing a very dangerous thing. In July 2010, after being told “YOU‘RE ASLEEP—IT’S TIME TO WAKE UP,” I stopped taking the 11 medications I had been prescribed by my doctors cold turkey. I did it at home, alone. The withdrawal was wicked and lasted about six days.

When it was over, I experienced one of the most exciting time periods of my life, after receiving my ‘life instructions,’ which included writing… books, songs, poetry, etc. Barely six months later, I began to experience ‘crashes,’ PTSD, anxiety attacks and depression because I really DID need to stay on a few of those medications. But I’ll tell you more about that later. I knew I needed psychological counseling. However, because I was on Medicare, the free clinic here in town declined me. At the clinic that DID accept Medicare, the sizable co-pays were more than what I could afford and I wouldn’t have money for gas to get there and back. I wasn’t willing to add financial debt to the stress I was already dealing with.

My son still lived in California and was to get married on March 25, (2012). I felt too emotionally, mentally, and physically messed up to go. Then I flat out told God (and I don’t know why sometimes I get what I tell him I need and other times I don’t) “IF YOU WANT ME TO GO, SEND SOMEONE TO HELP ME AND GIVE ME A REASON TO COME BACK!!!!”

That’s when Wayne showed up. At first, I was a bit shocked. Did God just send someone to help me? One of the first days he visited, I was about to go for a walk so I invited him to join me. During that walk, he pulled up a pant leg to show me the tattoo of a Scorpion. My first reaction to seeing it was that we were destined to meet because that Scorpion is my astrological sign. It was also his deceased father’s. It was as though he had shown up as a guide to direct me back onto the life path I had been given just after I went through the withdrawal.

Wayne remained in my life until the following year, helping me to remember who I was before I developed that strange sense of amnesia. He raved about my poetry, songwriting, and talent, helping me to gain a renewed sense of courage to step forward into life again as though emerging from a state of hibernation. He continuously told me both verbally and in texts things such as: “you’re a beautiful soul,” “you’re caring, considerate,” “you’re a positive energy,” “you’re a decent honest person,” “you’re extremely talented,” “you’re sweet and thoughtful,” “you have an awesome, unique sense of humor,” “you always have interesting things to talk about,” and after he read my book, Appearances: A Journey of Self-Discovery, he told me that “the poetry is outstanding, precious, and phenomenal.” I believed him. He helped me to get stronger in many different ways AND he gave me a lot of reasons to come back.

Metaphorically, Wayne planted flowers I didn’t know existed in the mental/emotional garden I thought I had already cultivated. I was also able to get closure on the last 16 years of my life to enter into a new one. And it was time to write this book, Part II of my life story.

This book is available in Paperback, Kindle, and Audible.

Click here to buy this book on Amazon.
Posted by Renee Alter at 1:34 PM No comments: