My Books on Barnes & Nobles


2000. I've lived an incredibly adventurous life although I didn't always see it that way. On May 24, 1996 (I was 40 years old), I ended up at my sister Carol’s again. The world had chewed me up and spit me out so many times, I had lost count. I was running from a dysfunctional marriage, an abusive boss, and extreme Texas weather conditions to return home with my tail between my legs, however, this time something was different. Every morning for two weeks, I woke up with divine inspiration to write about a particular subject. “Appearances” was born. Fifteen chapters including “Sky Diving,” “Chameleon,” “Choices,” “Jigsaw Puzzle,” and “Road Map” became the process of working through a lot of beliefs that had been holding me back for the first forty years of my life. I hope you begin to discover the magic in your own life. This book is about my personal journey (up to this point). I have redefined what happened in my life from a new perspective. I have written about my discoveries about the meaning of life, love, and me. Come laugh with me. Come cry with me. Come read Appearances. Included in my narration are details of my journey on how I was able to recover from a bout of Mono after years of 'suffering' from CFS (Chronic Fatigue Syndrome), brain fog, confusion, multiple infections, systemic candida, food sensitivities, myofaciitis, FMS (Fibromyalgia), depression, plus two car accidents.

2013. In 1998, my “bucket” overflowed and I was derailed by the invasion of disabling pain and depression, diagnosed as Fibromyalgia. When I could no longer work, I lost my identity… the self I had found when I wrote my first book, Appearances: A Journey of Self-Discovery. Norman Cousins, the author of many health-related books, said “The tragedy of life is not death, but what we let die inside of us while we live,” which can explain what had happened to me. However, I never in my wildest dreams imagined I was merely in an invisible cocoon and that someday, years later, I would experience an extraordinary transformation and emerge as a happy butterfly. Now the past is just a story... one I told in this book. Enter with a brave heart as you read about my journey.

This book is part two of my life story. Part one is in Appearances: A Journey of Self-Discovery. Included in my narration: a diagnosis, medical treatments, getting on disability, the experience of going through withdrawal after I stopped taking 11 prescription medications cold turkey, followed by 3 months in a ‘pink cloud,’ followed by almost 2 years of debilitating depression. Because I could not get the psychological therapy I needed to get through this (CBT), I began doing my own research (details in the book). At the end of the book are 5 Appendixes. You can find a wealth of information including links to websites and videos on this website. There is also a link to SoundCloud, where you can listen to the songs included in the book.


2013. As I look out my kitchen window at the squirrels running around and gaze at the photo of the precious cat I named Snowflake while she was in a tree, I was inspired to write these short stories about cats I've known under the title of VIEW FROM A TREE.

Included are photos of many precious cats! The photos are available in either Black & White or Color.

As 2015 rolled in, I discovered Teal Swan... and one of the things she said was: "Ask yourself... what would someone who loves themselves do?" As I asked myself this question for several weeks, an idea began to form... treat my body as if it was a beloved garden... fertilize it, water it, pull the weeds, etc. This idea grew into a workbook with the best of what I've learned... the exercises, nutrition, therapies, etc. As my workbook developed, I realized it would be useful to others as well...


2015. With all the podcasts and webinars I listened to, I was also learning about the concept of writing stories about situations that happened in your life that you would like to go back in time and have different outcomes to. I wrote my first Fairy Tale.

One magical night, I posted on Facebook (a writer's group) that I had done this... and would anyone else like to write one, too? I was pleasantly surprised at the number of people who responded.

FAIRY TALE PROJECT was born and I created a Facebook Group for it. I collected Fairy Tales from other authors... edited, rewrote, formatted, organized, and completed Volumes 1 and 2 of An Anthology of Modern Fairy Tales. I also discovered that everything I've been listening to in the fields of transformational psychology and personal development is very useful in 'coaching' people through their stories.

In February 2011, I received a new laptop computer as a gift, along with internet, and I was inspired to start a blog to log my new journey of transformation... which I didn't realize at the time was going to take place. Rather than having interested readers go back through almost four years of blog posts, I decided to put them all in books. The original blog can be found on this site.

I began to write fiction short stories in 2015 but instead of waiting to have a whole book full, I found out a new fad of short stories is in!!! The Adventures of Gnat, Twin Flame, & The Land of Mark are on Kindle & Audible. I also wrote a speech for a workshop I attended and put it in the book Miracles Sandwiched Between The Challenges: Making It Through The Roller Coasters Of My Life (With The Help Of My Guardian Angels) available in paperback, Kindle, & Audible.

It's the beginning of April 2017. I had seven tales -- and it was time to put them in its own book: Once upon a time... as all fairy tales begin... sparks the imagination. I recently began writing them after I came across the concept that regardless of how difficult your life has been, you can recreate your life by imagining and writing a different story. For those who like to immerse themselves in all kinds of possibilities, I recommend that you write some of your own. Who knows? One of them might come true! The following short stories are in this book: The Psychologist, The Barista Restaurant, Twin Flame, Wish Maker, The Blue Stone, Kindred Spirits, Fairy God Father.

2019. In 2005, Just before I turned 50, I found out I had Grade 2 Spondylolisthesis at L5-S1 which had been the source of most of the discomfort, pain, and problems I had with my back, hips, knees, and legs over the years. Then in 2019, I found out I also have a bilateral pars fracture. To date, I haven't had surgery. It is now 2018. I've been researching, studying, reading, taking classes, watching pain summits, listening to interviews by specialists, and putting into practice all that I've learned in pursuit of becoming my own advocate. I cover the multi-faceted topics I have learned and put into practice in memoir-style narration to serve as my personal survival guide as well as a book that others who have spondy can read and relate to. Photos included.
Note: This is the most current version. There are two other versions with different covers listed on Amazon, but I was unable to remove them.

2019. Through many levels of spiritual and emotional growth, much time was spent in contemplation, reflection, observations, reflections, musings, and introspection of objects, wildlife, weather, pets, trees, flowers, clouds, and more. Words organized themselves into poetry and prose. Photography captured the moments.
2020. I’m still here. I am a survivor. However, I didn’t realize it during years of experiencing one situation after another with adrenaline rushes that wreaked havoc on my health. Resilience wasn’t in my constitution or my vocabulary. I wandered through life searching relentlessly for meaning and love in all the wrong places through the distorted lens of my false beliefs and programming. While this book is filled with my stories from the past, for the most part, I choose to let them live in my books while I create new, improved stories for my life. Prepare for a wild ride through the roller-coaster of a lifetime. This book includes content from Appearances and Love, Life, & God.

2015. Revised 2020.
Is your life perfect?
Excellent mental and physical health?
Doing what you love?
Then you don't need this book.
For the rest of you, in Personal Journal & Recipes for Healthy Living, the recipes are not just food-related. In between these ‘recipes’ are journaling exercises guided by wisdom on how to proceed. The journaling exercises lead up to the grand finale of how to write and publish your own book using what you wrote in this journal. Inside are snapshots of just about all aspects of life including goal setting, thought watching, mental health, nutrition, complementary and alternative medicine, exploring childhood memories, stress management, faith, and budgeting. I made this journal simple vs. complex as I personally need simple! 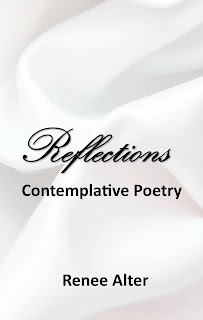 2012. Previously A Toolbox of Poetry, I retitled this book and created a new cover for it. Description: I indulge in many forms of poetry depending on the mood I am in when I write them. Some poems rhyme, some don't, and some are merely written with the rhythm of my thoughts. I wrote the poetry in this book when I was younger... so it includes infatuation, relationships that didn't work out, and what I went through when I suffered from depression and chronic illness. 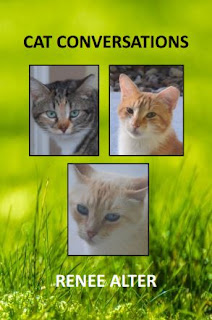 2021. A light-hearted book filled with beautiful photos of cats... and the imaginary conversations among community cats. This was a story for my granddaughter. Then I created the one below which included this story. 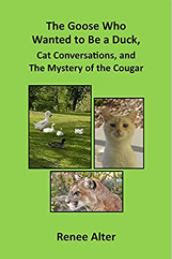 Goose Junior left home to join Thomas, Gertrude, Esmeralda, and Charcoal to live life as a duck. Even though the Creek was their home, they began to hang out at the nearby apartment complex… seeking handouts from residents. However, one day, the animal control officer was called. What will happen next?
Callie, Munchkin, and Blue Eyes were born and grew up together by the creek. The conversations are imaginary and humorous.
Mama Kitty killed a baby snake… and the mother turned out to be a snake witch… that cast a spell on her. A mysterious white horse and a woman carrying a bow and arrow appears. 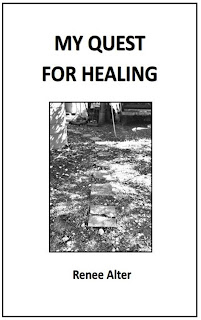 Stepping stones. From one intense experience to another, the author began to see how they were all connected while doing research to find out what happened to her in 2010 and how to get that amazing energy back. Along the way, she learned that childhood trauma had dictated how she lived her life without her realizing it. Then, at the age of 65, someone appeared who could explain her supernatural experiences. This book is filled with the holistic solutions she sought out in her quest for healing. 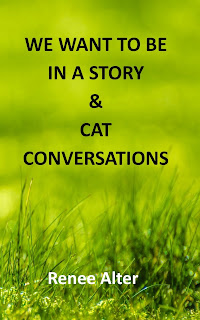 Have you ever had a number of different creatures show up at your house? What if they all came to give you a message? Ducks, peacocks, a peahen, an anole, a goose, a squirrel, a grasshopper, a deer, a raccoon, an opossum, a snail, a praying mantis, a fox, a wolf spider, a small spider, a butterfly, and a bee arrived at Miss Rita’s place to give her messages of wisdom after they tell her, “We heard you are a writer, and we want to be in a story.”
Callie, Munchkin, and Blue Eyes were born and grew up together by the creek. They were TNRd (trapped, neutered, and released) by Lampasas Community Cats-TNR. The author (Rita in the book) is their caretaker. The CAT CONVERSATIONS are imaginary and humorous. The photos were taken by the author.