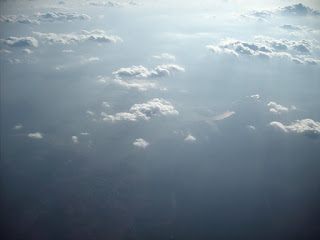 This morning when I was introducing my family to someone new (via photos) and telling her about the miracles in my family, I realized I was being reminded of additional possible miracles for myself, too.

When my brother, Jon, was born, doctors didn't expect him to live. And if he did live, they said he'd be a vegetable. Contrary to what they recommended (put him in an institution), my parents took him home after 30 days in the hospital. The large spinal fluid-filled sac at the base of his skull was removed along with part of his brain. He was supposedly a vegetable and blind. My mother figured out it was reflexes he lacked so he couldn't blink. She taught him how to blink. To make a really long story short, he lived to be 49 years old. He could laugh, play, and love even though there wasn't much he could do physically.

When I miraculously was able to walk again after five years of having two numb, heavy legs, I never imagined the possibility of becoming wheelchair dependent again. In efforts to support my weight with canes and a walker after jarring my lower spine which affected my legs, my arms (more so the right) from shoulder to fingertips became compromised. On top of all that, I developed difficulty swallowing... even water... and lost eight pounds in two months. As petite as I am, fortunately, I had excess belly fat to lose. Malnutrition weakened me further.

After many months of doing my best to maintain my independence, I decided it was time to reapply for CAS (Community Attendant Services) through Medicaid. It took a few months for all the paperwork to get processed. Relieved to finally have someone coming over every morning for companionship and to help me with laundry, cleaning, dishes, food prep, and run errands for me, I found myself telling her the miracle story about my brother.

After telling her that story (I am a self-declared storyteller), I began to tell another one. When my son was four, I went to a single parent event. The next person in line was another single mom with a precious four-year-old daughter with blond hair and huge blue eyes. While waiting in line, I learned the girl had a rare condition, and her mom was trying to get her on an organ transplant list, hoping for the transplant before the young girl died. I remember believing that Chantel would live despite what her doctors were predicting. Then I lost touch with them. I had moved out of the apartment complex about a year after meeting them. Matter of fact, I had moved quite a few times, including to Texas and back to California. But this story is about them, not me, so I will continue with the story.

Thirteen years went by. One day, I went to visit my older sister's house. There was something very familiar with the eighteen-year-old blond-haired blue-eyed girl who was hanging out with my nephew in her adorable pajamas, but I couldn’t place her. Then I heard her name.

“Chantel? Is your Mom Cheryl?” The answer was yes.

About two years later, Chantel announced to my sister that she was pregnant. Then she held up a marriage certificate to prove that they had eloped two months before. They had gotten married in secret after my nephew turned 18. I don’t remember why they felt they had to elope.

Chantel’s team of doctors was not happy about Chantel being pregnant. Medically they didn’t even know how it was possible after all the surgeries she had endured over the years. They strongly prodded her to terminate the pregnancy – yes her doctors – as a pregnancy would most likely kill her. Chantel said no. I could see in her eyes that she believed everything would be OK, and she was willing to risk her life to try and have the baby.

Chantel carried her baby to term and gave birth to a beautiful healthy baby girl, without any of the predicted complications in December of 2004. Everyone celebrated the miracle. Two years later, Chantel became pregnant again. Her doctors, just like before, were apprehensive that the pregnancy could kill her. Chantel refused to terminate the pregnancy, took really good care of herself, and in September 2007, gave birth to another healthy baby girl. Chantel and her daughters are healthy and happy.

After I told both these stories... stating doctors are not God, I felt as if the words were meant to be spoken to myself. I felt inspired by telling my own inspirational story. Just like my brother could laugh, play, and love... despite his disabilities, I can, too. Maybe my condition will improve. Maybe it won't.

I now have two beautiful, amazing young attendants who love what they are doing... helping people... the aged and disabled... and caring for them. I'm glad they have a cheery person to take care of. No matter how much my body aches and how limited it is, I can still smile, laugh, love, listen... and tell stories.
Posted by Renee Alter at 5:55 PM No comments: Links to this post